We currently have several projects in process to help people back into their own homes, aiding with people's rebuilding needs, and also essential repairs at our two facilities; The Winsome, and Mazzer House.

Our organisation has a minimum of overhead, and is placing money where it is most needed. We invite you to contribute financially to the huge needs we are currently facing.  Donations are Tax Deductible. 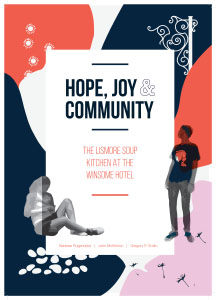 Over the last 18 months a group of Southern Cross Researchers has been undertaking a study of the Lismore Soup Kitchen / Winsome. Barbara Rugendyke, John McKinnon& Gregory P. Smith have allowed us to make available their published report.

"Established thirty years ago this year, the Lismore Soup Kitchen at the Winsome Hotel fills a vital role in the Lismore region.

In 2019, it served over 80 hot meals every day, a staggering 30,000 meals a year, as well as take away food, to marginalised and disadvantaged people. This, along with provision of an array of essential support services, including medical, counselling, interest and support groups and informal, non-denominational Sunday church services.

Accommodation for men is available at the Winsome and also for a small number of people, both men and women, at Mazzer House. The Hotel has accommodated 164 people in the past decade. The research reported here presents the outcomes of a survey of over one hundred individuals, of volunteers and of those who visit the Winsome to access services."

You can download a full copy of the report here.

The soup kitchen changed my life

VOLUNTEERING: What are the incentives and the roadblocks?

When my fourth child started school, I was now free to spend some of my time however I wanted to.

Some friends of mine ran a soup kitchen, so I told them I would help out when I could.

Now was the time.

I started as the sandwich-maker at the Lismore Soup Kitchen which was a operating in a very small, awkward kitchen in a shed. I got to know the team for Tuesdays and they were a very happy bunch of people working in a kitchen that was not ideal but they were very happy to put together an awesome lunch and clean up afterwards.

I probably had the wrong motivation to go work there at first. I thought these people are going to love it having a young energetic person come and serve up these free meals.

Making sandwiches was not what I had in mind but I did it as it had to be done. I was not in any position to argue or convince anyone otherwise.

The cook made a fantastic chicken curry (Hari Krishna style) complete with Dahl and Papadums. The meals had to accommodate for seventy people. It's a very daunting task.

When I had finished my first few hours at the soup kitchen, I realised that I had loved being there. I loved the opportunity of being part of an organisation that feeds people who may not have had the chance to eat that day.

Within two years, I was the Head Cook/Team Leader which involved shopping for the main meal within a budget and organising your volunteers with the tasks that needed to be done in order to get the lunch and sandwiches prepared.

The chicken curry I mentioned before became the dish I wanted to serve. The cook who use to make this dish was leaving as her business became more busy. I was very interested in cooking and I got to spend time with her to find out the secret ingredients.

I also became passionate about wanting to provide wholesome, healthy food. The chicken curry was a way to give the people at the soup kitchen fresh ginger and garlic... and a lot of it.

I served this curry with rice, natural yogurt and fresh coriander leaves.

Over time, my day became a popular day for the kitchen. One of the patrons bought me a chef's hat and this was a special gift that I will never forget.

I got more involved. I would spend time in the kitchen when no-one was there, cleaning and organising it better.

Then I started a Charity Restaurant as the Soup Kitchen was now in the Old Winsome Hotel, the Grand Old Lady.

I needed lots of volunteer staff and lots of time.

These ran for 18 months with about seven restaurant nights in total.

My cooking days are over now after seven years but I am still helping out behind the scenes.

It gives me a type of joy and satisfaction that I have not felt from anything else. Providing food for people who may not have eaten that day really does fill you up with love.

Via Credit Card
Via Direct Deposit

Across this region and beyond, there are a large number of supporters who pledge a regular gift to the Winsome 500 Club. Please click here to become part of this team.